You’ve probably seen the recent headlines. You can’t go a day without hearing about it. Voices on both sides shouting to be heard.

If we are talking about freedom in the purest form I am a big supporter. You do your thing and I will do mine. No harm, no foul.

However, where is the line where one humans rights stop and another’s continue?

How does one determine where a person’s beliefs start and another’s should end when there comes a difference in the name of religious standing?

The law separates church and state. It is one of the things I love and appreciate about my country. It’s right next to ridiculous holidays l get to take off work.

With this in mind, should elected officials, who work for the people, not be held to the same standard? Why should current elected officials, those serving the state where elected, cite religion as a reason to not serve tax paying citizens equally?

The County Clerk in Kentucky who is currently behind bars for refusing to comply with the law. She, along with her staff, were refusing to give marriage licenses to same-sex couples.

Despite being told to comply or suffer legal consequences.

Her office refused to issue licenses solely on religious premise. Not for any legal or arguably reasonable fact.

Consenting aged, not otherwise legally entwined, unrelated, and of sound mind adults were denied marriage licences. Based on someone’s interpretation of religion and moral code. This seems the only moral high jinks I see going on.

The only real problem is that committed, matrimonial minded adults were denied their basic rights.

It was not so long ago that multiracial marriages were against the law. Seems ridiculous now. Yet what is happening here does not seem at all ludicrous for an obnoxious percent of the population.

The law is the law. It’s pretty clear. Black, white, gay, straight, hot or ehhh … not. Still. All equal.

Couples, according to US law may be married if they choose.

In any state they may reside, visit or find themselves otherwise geographically located at the time they deem their significant other worthy of a lifetime commitment.

Let’s just say for argument’s sake that I, a representative of a corporation, in charge of customer relations, decide that I shall no longer offer service to those customers which offend my religious beliefs.

*For the record, I am only offended by people who punish others in the name of religion.

Let’s say I refuse to allow services, which are clearly outlined by my company policy, to those I deem unworthy. My fancy desk and beautiful view would be parted faster than a  gentleman’s dollar bills on his first strip club visit.

That is how it is.

It’s basic decency to not be an asshole but more it’s the law, the rule, the policy. We as society live by them even if we don’t feel like it some days.

Sure you can get away with a little eyebrow raising behavior. Like speeding on a quiet country road. Or offering a little extra discount to people who you have common interests (where my gays at?!)

A little bout of shenanigans is the spice of life.

Ruining someone elses in the name of (insert your religion here) is absolutely not. 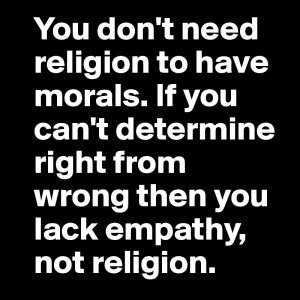 If you absolutely must be cruel based on your “religion” then maybe, possibly, you could manage to not hold an elected government position.

Trying to be grown up, married to the love of my lesbian life. I am also a momma to a couple human kids and few with four legs. I work a full time office gig, drink too much and drive too fast. I blog with what energy I have left at the end of the day. I write about life, love and everything in between; as often as I possibly can. My blogs are always punctuated with a pinch of my charming sense of sarcastic humor. Maybe not for the faint of heart, definitely funny. View all posts by myidioticbliss

Read all of my blogs here

For the diva on a budget – Free money! No catch!

Looking for something specific?

Charlie aka The Charleston Chewer

Diary of a Dachsador Puppy

"How far can you go for love?"

The travels of an Appalachian expatriate

I am Moved by Faith
Daddy Coping in Style

A dad coping with fatherhood, stylishly.