It was this time last year that our home state made our marriage legal. We were so excited, it was like a second wedding day. Sorta like that … but without rain, stress, arguments or blisters. Good times.

So in the spirit of a (sort of) one year wedding anniversary I compiled the top 10 best of best things that happened this last year, our first full year of being legally married in our home state. 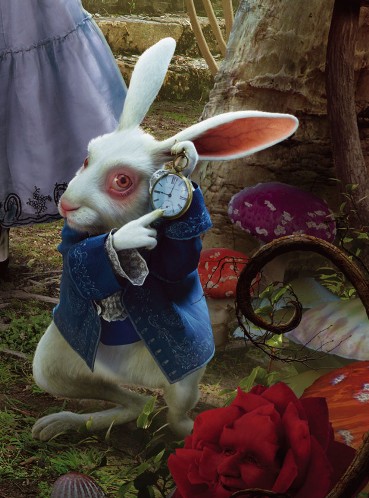 Remember the white rabbit from Alice in Wonderland freaking out about the time? Yeah. Put that bunny in a red curly wig and a sundress and that’s me.

One whole year since we became wife and wife.

A whole freaking year of ups and downs and all arounds. We danced around the “for richer or poorer” and all those traditional vows whether we said them or not. It hasn’t been easy but it has gone fast and if I could do it all over again I would. Except slower, and I would have started blogging about way sooner. All the good and the bad and unbelievable love.

All the things marriage is. It all came around in our very first year.

Now it’s time we celebrate that we lasted this long. It’s just an anniversary but it’s a big one. People will be cashing in on the bets they placed 12 months ago kinda big. Giggle if you will, the odds for a big payout were probably great if we made it. We love hard and we fight like someone will have to stop breathing before it can be over. Ok, not really, but it has been close.

We never do anything small. If you have followed my blog to date you may have glimpsed what married life is like on the inside. Gift giving is a major task. We go big around here.

I’ve requested the advice of co-workers and I’ve googled “first anniversary” and nothing jumped out. Just paper stuff. Sometimes really expensive paper stuff. I am all about some sentimental names on canvas but that isn’t her and therefor isn’t us. Tricky territory. This anniversary thing is almost worse than the ridiculous wedding markup. If it says wedding or anniversary you’re going to pay triple. True story.

I tried to search “first gay anniversary” thinking that might bring me to something unique but personable but still nothing. Well nothing G rated and appropriate for sharing. I did get some ideas though. We will see what she thinks after I present her the anniversary gift of all gifts. If she hates it I will keep those search results for a plan B. Always good to have a plan B.

running out of what little sanity I was holding onto.

I can’t get a re-do on the very first celebratory year of marriage. It almost feels like getting married again. I’m so nervous. Not “what if I don’t fit in my wedding dress” nervous. I can still eat pizza. The kind of nervous that compels me to wonder what happens if this doesn’t turn out as beautiful and magical as I planned. That kind of nervous.

I’ve looked at Pinterest and still nothing.  Unless I want to spend a day making paper dolls of each of us with materials I will need to hunt down in a craft store.

The problem is I am neither crafty nor patient enough for anything on Pinterest.

and it makes me hungry.

Has anyone ever actually browsed pins and not been bombarded by super fanciful flower adorned cupcakes and exotically named smoothie drinks? each served in cute mason jars sorted by size and color? sitting neatly on a handmade shelf of reclaimed wood?

I’ve got no time for funny pictures of kittens and recipes I will never make.

I need an idea. I need to get creative.

Maybe a giant glued together construction paper card with glitter and pop up hearts like a toddler’s first book about dinosaurs. That sounds like a lot of work though.

Back to the drawing board. By which I mean the internet.